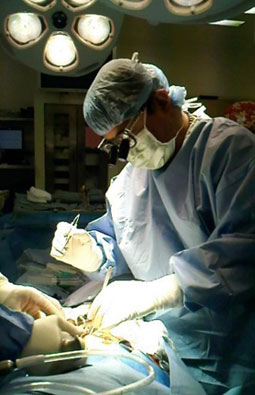 The Carotid Artery is the major artery that feeds the brain.  This is a common artery that can have plaque buildup.  Plaque in this artery can become unstable and lead to strokes.  When the plaque becomes unstable, small pieces of the plaque can break into pieces and float into the blood stream to the brain.  These small pieces of plaque lodge into the brain causing a loss of blood flow to parts of the brain, which can cause a stroke.  Common symptoms of stroke are motor or sensory deficit of the arm or leg, facial droop, blindness in an eye, and difficulty with speech.  These symptoms can be transient or be permanent depending on the degree of the stroke.

Surgical options such as carotid endarterectomy or carotid stenting are considered if the plaque is deemed to be unstable, causing stroke symptoms.  Also, carotid plaques that cause a very severe narrowing and restrict the blood flow to the brain are also considered for surgical repair, even if the patient is not having symptoms.

The most common aneurysm seen is the abdominal aortic aneurysm.  An aneurysm is a weakening of the wall of the artery that causes the artery to progressively dilate.  As the artery continues to expand, the arterial wall will become too thin, which will lead to a rupture and cause massive internal hemorrhage.  A ruptured abdominal aortic aneurysms will most likely cause death.  An aneurysm of the abdominal aorta can be repaired electively when they are identified.  The indication for elective repair is usually based on the diameter of the aneurysm.  Surgical options include open surgical repair by replacing the aneurismal segment with a graft.   Less invasive surgical options include endovascular repair of the aneurysm with a covered stent graft.

The kidney is an important organ that controls blood pressure.  If the arteries to the kidneys progressively narrow, the kidneys will send out neurotransmitters to cause the blood pressure to increase, leading to hypertension.  Also, progressive narrowing of the kidney artery will cause worsening renal insufficiency. Endovascular treatment with angioplasty and stenting can alleviate this problem.

Dialysis access is necessary for patients with end stage renal disease.  Temporary placement of a central line is sometimes necessary for dialysis.  However, studies have been shown that creation of an arteriovenous fistula (AVF) or arteriovenous graft (AVG) is a better long-term solution.  An AVF is a direct creation of a fistula using the patient’s native artery and native vein.  This type of dialysis access is preferable because of the good long-term results.  There are many types of AVFs that can be created in the arms depending on the vascular anatomy.  If a patient does not have a good superficial vein for dialysis access creation, then placement of a AVG may be necessary.  A AVG is a connection between the patients artery and deeper vein using a synthetic tube.

The venous circulation is responsible for returning blood flow back to the heart from the end organs.  Venous insufficiency is commonly seen in the legs.  Poor venous return can cause significant symptoms in the legs such as aches, heaviness, swelling, burning, itching, and fatigue.  Advanced venous disease can lead to dermitis, hyperpigmentation to the skin, and ulcers in the legs.  Less invasive treatment options are now currently available to address this problem in an office setting with ablation therapy, phlebectomy and sclerotherapy.

Dr. Vijungco is a board certified vascular and endovascular surgeon. He has a wealth of experience in the management of advanced arterial disease and venous disease.